Come to grips with the truth, boys 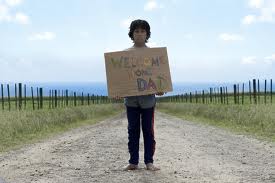 This is rural New Zealand, I am far away from much of what I know, for instance, apparently it’s normal for five kids below the age of eleven, toddlers included, to take care of themselves (even if in a strangely civilized manner, including sit-down meals and prayers before dinner) while their grandmother goes out of town for a funeral; it’s normal for men to grow up to be stoners, degenerates, drunkards, losers; it’s normal for a dilapidated wooden structure to sit before a sweeping blue sea, and for that sea to be almost an after thought; it’s normal to have a billy goat as your best friend.

If the film weren’t based in this poor Maori community where everything has a unique, quirky obtuseness about it, this film would simply be the same sad story told over and over, the one about a boy who idealizes his absent father in a fantastical manner. His name is Boy, his mother is dead, and his younger brother wanders around exercising supernatural powers, those he believes killed his mother when he was born. Boy, meanwhile, espouses to anyone who will listen (including the billy goat) about his father’s world conquests—A Michael Jackson looking Shogun. In fact, the father is in jail.

Then he’s out of jail, home with his “gang” looking for the money he stashed in some field whilst fleeing the scene of a crime. Only he’s such an idiot that he can’t remember where, exactly, he buried it, so the boys spend their days searching for the “buried treasure” with shovels while their father observes from afar, stoned, carousing like a fool with his mates.

A teacher lectures to the boy early in the movie: “Your father had lots of potential, too, just like you.” “What is potential?” The boy inquires, curious. He finds it in a dictionary, later, and then still, it’s not so clear. Nevertheless, a look of pride washes over his face, and so begins Boy’s journey as he embarks on his pursuit to transform the ideal into reality, to be like his father, a man with POTENTIAL… Potential for only one thing, in this case: to expose the hard brutal truth about ideals. But what father, realistically, can offer more? This, captured in a very moving scene at the end of the film, when the sons gather with the father beside their mother’s grave. He’s depleted, broken, his glances say to the boys who have fixed their gazes on him contemplatively, resignedly, and yes, a little hopefully, a little expectantly. Here we are, their expressions say…you created us, and here we all are.