Can We Just Eat 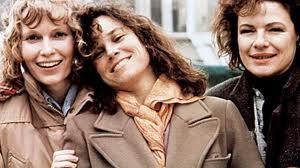 There’s a great scene in Hannah and Her Sisters where the three women are having lunch in a French restaurant. The middle sister, Holly, played by Dianne Wiest, is arguing with the oldest sister, Hannah, played by Mia Farrow. Holly is upset at Hannah’s rather unsupportive reaction to her latest career change. Holly wants to be a writer, this, after a stint at catering, acting, and a variety of other professions. Hannah, the strongest and most secure of the three, is on the defensive; aren’t they always? Meanwhile, the youngest sister, Lee, played by Barbara Hershey, is slowly losing it. Her sisters’ banter is grating, and she’s spiraling in a mix of guilt, misery, and frustration, for she’s going through her own crisis, one that can’t be revealed at the table. But then what is revealed at tables between sisters? Especially three sisters, for two is one thing, but three is an entirely different beast, because what’s not revealed at the table has likely already been revealed in side conversations between two of the sisters without the third’s knowledge. The players in this two-to-one scenario revolve in an orbiting manner, and Woody Allen has captured it spectacularly in this film, what’s part of an accepted, unspoken truth: if you confide in one sister, the secret will inevitably reach the other. We know it goes on, and we never speak of it.

The emotional dependence between Hannah and her sisters is so strong that it emanates from the screen, captivates you, and draws you in. The acting is seamless, organic, superb, and I don’t think you’re ever going to see an interaction amongst sisters portrayed in a more realistic manner.

“Are you OK?” At last Hannah turns from Holly to Lee. She’s both exasperated and concerned, as only an older sister can be. “You look pale.”

“I’m just hungry,” Lee responds, massaging her brow. “I think I need to eat,” sister code for, I can’t take this anymore. “Can we just eat.”