Late at night, someone (not me) is doing that incessant surfing, and then there she is, Tippi Hedren aka Melanie Daniels, awash in her cool, sultry anger. She’s at the Bodega Bay schoolhouse, making small talk with the teacher, ex-girlfriend of Mitch, the man Melanie is presently trying to seduce. The teacher is giving Melanie a bed for the night because she hadn’t planned on staying. She’d come to Bodega Bay uninvited to surprise Mitch with lovebirds. The ex is jealous of course, though pragmatic, for she and Mitch broke up a while ago…because of his mother. Mother? Melanie barely blinks. She is a woman who gets what she wants.

But will she? Will Mitch, wise to Melanie’s spoiled rich girl game, be the man to teach her a lesson? Is the mother going to pull some evil, wicked stunt?

Hold on. Forget all that. Birds are flocking, attacking, left and right.

No. No. I’m not watching this, I told him in no uncertain terms. It’s classic Hitchcock, I know, but I’ve seen it a million times. Please don’t make we watch this now.

He’s laughing at me. I tell him it’s not funny, but OK, just this one scene because, well, “You simply must. Textbook cinematic editing, masterful suspense buildup, it never gets old!” Melanie is outside the schoolhouse, seated on a bench waiting for class to finish and the children to be let out, lighting a cigarette while behind her a solitary black crow sits perched on a jungle gym. We cut to Melanie, smoking, while the children’s’ nursery rhyme emanates from the classroom. Four, then five, then nine black crows perched behind her now, Melanie all the while impervious, though disconcerted, turning every so often to look at the school house, no music by the way, no score, just subtle coos and light fluttering of wings, and that incessant nursery rhyme. Time passes. A solitary black crow flies into Melanie’s vision. She follows it as it lands on the jungle gym, now obscured, overflowing with those horrendous black birds, and you want to die.

This is horrible, I say, unable to look away, until the birds start attacking the running and screaming children. One falls to the ground, a torturous close-up. It’s time, I say, and he switches the channel. 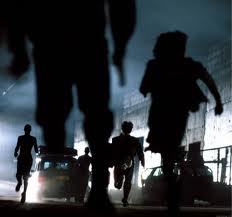 A lone survivor wanders the abandoned streets of London stalked by zombies, humans infected by the “rage” virus. 28 Days Later. “You’re kidding me,” I say, deadpan.

“One of the best horror films ever made.”

Fine. Switch. Birds crash frantically into windowpanes at the local diner, and into the phone booth where Melanie has sought refuge. Agonizing minutes of pecking, biting and tearing…what is it about terror that makes you sit paralyzed in want of more?

A zombie has been captured by a band of survivors. His eyes are blood shot, he is foaming at the mouth; he’s clutching a chain that’s been clamped around his neck, raging like a rabid tiger. “Zombies don’t eat. They just kill. So eventually he’ll die, and the survivors want to know how long it will take him to die. They need to know how long they must sustain themselves before all the zombies are dead.”

“Thanks for that. Because I was really wondering…”

Birds. Never have I seen so many birds in my life, not before nor after nor in any of my dreams. No more discussion, no more channel changing, we watch the movie until it ends, and I stand up, shaking. Out of sorts, pondering the nightmares that await me, I head for bed. 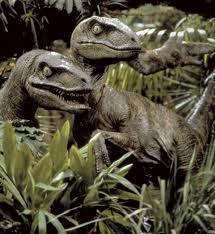 As I enter the bedroom I pause. Behind me, the roar of a dinosaur. Ellie gasps, then silence. A crane lowering. Trees rustling. A ravaged fit of suckling and gnawing. “You bred a T-Rex?” says Dr. Grant.

It’s the terror in his voice.

I turn around and go back.