Betty and Jamie Have a Conversation About “Melancholia” 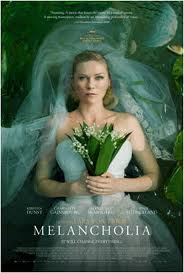 Betty: Hurt me. I should have known after seeing Breaking the Waves, thank you very little; I knew what this Von Trier guy was capable of and still I subjected myself.

Jamie: Sure, it’s depressing, but there’s also something immensely hopeful about it…the world coming to an end in such a hauntingly beautiful way.

Betty: They were blown to bits.

Jamie: …the way the sisters were holding hands in that cave made of sticks with the son. And it was quick.

Betty: It was a dream. That’s how I’ve decided to interpret it. The planet Melancholia was in Claire’s mind, her way of dealing with her depression; she obliterated it.

Jamie: I’m going with real. When they discovered Melancholia’s doomed approach, Claire began to function again. It was as if she’d entered this state of calm; maybe she was even happy.

Betty: And Justine became unhinged, she, the sister who supposedly had it together.

Jamie: She couldn’t face death, so she panicked.

Betty: I suppose you think I’m her.

Jamie: The sister who had it together? No, not really.

Jamie: No, I’d panic. I’d want the wine on the terrace. That probably would have been my idea. Plus, I’ve never been depressed to the point where I can’t move or eat or sleep.

Betty: I can always eat. 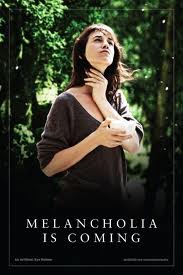 Betty: OMG his quirky irony was the only thing that got me through the film…

Betty: I know, what was up with that?

Betty: I liked the fact that the sisters were together…in the end.

Jamie: Even though it wasn’t really the end…

Betty: You know what I mean.

Jamie: I know. I’m glad they were together too.