Betty and Jamie Discuss How to Go to the Movies Alone 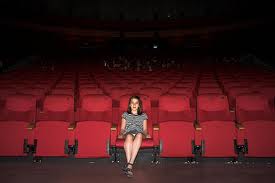 Jamie: I go to movies alone more than I go with people.

Betty: Shakes her head in disbelief, though her sister never really surprises her.

Jamie: It’s just easier. There’s no haggling over which movie to see at which theater, when to go. No one to lament my pick, to make weird grunts and gasps or kick me when I burst out laughing too loud and hard.

Betty: But what if I run into someone I know!

Jamie. Go during a weekday; trust me, you won’t run into anyone you know.

Betty: I suppose it helps when you don’t have an office to be at.

Jamie: …no later than four o’clock, you’ll get all the early birders, people over sixty, and they’re harmless.

Betty: I hate the idea of some weirdo sitting down next to me.

Jamie: I’ve been to probably a hundred movies alone, and only twice did a guy sit down next to me unnecessarily, meaning, there were plenty of other seats available—I got up and moved. But that’s an anomaly.

Betty: Isn’t it kind of pathetic?

Jamie: You’d be surprised at how many singles go; you won’t be alone.

Betty: That’s what I mean. Pathetic.

Jamie: It’s reality. Look. You’re always sure to get a seat. So you can arrive late, when it’s dark and the previews are showing. No one will even notice you. Oh, and whatever you do, don’t buy popcorn.

Betty: What! That’s the best part, the whole reason I go in the first place.

Jamie: If someone you know comes up and you’re scarfing your way through one of those big tubs while sipping from a giant sized coke AND you’re alone, then all bets are off. You’re officially a loser.

Betty: What about a small popcorn?

Jamie: Pick an isle seat so you can bolt right after the movie’s over.

Jamie: And make sure to pee beforehand. The biggest issue is going to the bathroom; there’s no one to watch your stuff.

Betty: Is thinking about those nonpareils.

Jamie: Lastly, enjoy the solitude, the little indiscretion because, after all, no one needs to know.