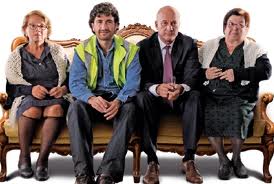 I dropped my husband off at Malpensa in the pre-dawn light, plugged Corso Vittorio Emanuele 135 Naples into my rental car’s GPS, and drove off with one last giddy nervous wave. I still remember the look on his face as he stood on the curb watching me go: disbelief, consternation, a touch of irony, but mostly surrender, for I had a mind of my own, and a taste for adventure that he didn’t.

“You can’t go to Napoli alone,” he’d assured me, when I’d told him my plans.

“It’s full of thieves.” He doesn’t really believe this, it’s just something he has to say because he’s from the north.

“They throw garbage out of the windows.”

“Why can’t you just go for the day, like everyone else?”

I shrugged. We’d already gone over this. I was staying for a week.

“I’ll take you to Napoli next year, when I have more time.”

We’d been in Piemonte for a family reunion. “It’s now or never.”

He sighed, long and burdened. 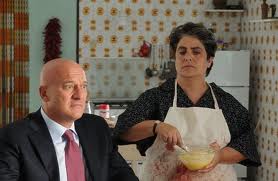 His families’ phone numbers were programmed on my speed dial, underneath my shirt I had a money belt tied to my already-sweating waist. Eight white-knuckled hours on the Autostrada before I hit Campania, where Vesuvius rose ominously in the distance and the bay grew into a moody shimmer on my right. I swerved off into the last Autogrill before the City Center tollbooth, my heart beating through my chest. What the hell was I doing? I refilled my tank. After triple locking the car door, I went to the bathroom and emptied my bladder. Inside the café I bought rations of water and panini in case I got lost, stopped in traffic, car jacked, robbed… Thump, thump, thump went my heart with all the possibilities for which I’d been forewarned as I proceeded cautiously through the tollbooth. After this I flew for an exciting few minutes with the window down, hair flying, taking in the curious scents of rot, kelp, diesel. Then a halting stop, a sea of traffic, a sprawl of messy, car cluttered, soot-stifling chaos. 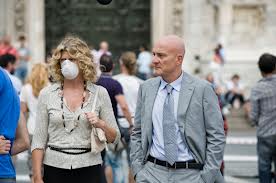 There is no description of one’s first venture into Napoli better than Luca Minero’s in his film, Benvenuti al Sud, in which a postal worker from Milan, Alberto, gets re-assigned to Napoli for two years. Think about what happens to Woody Allen when he ventures off the Island of Manhattan. Unfortunately, you can’t find the film in the U.S., nor does it have English subtitles, but it’s this early passage, amongst others, that can’t be missed.

“I’ve got some good news and bad news,” Alberto’s boss tells him at the beginning of the film.

“No. You’ve been transferred to the south.”

“No worse. You’ve been transferred to Napoli. You leave Monday.”

“What do you mean?” he says in a rambling panic. “I don’t have any summer clothes. Where am I going to stay? I don’t speak the language…” his voice trails off into silence. His head bows, then lifts again. “What’s the good news?”

“That is the good news. The bad news is that you have to stay there for two years. It’s either the south or you’re fired.”

Before driving off, his wife, beside herself, gives him a bulletproof vest, SPF50 sunscreen, and advises him to take off his wristwatch (and wedding ring) lest they sever his arm to take these prized possessions. He also brings along a fire extinguisher, a fan, a hunk of Gorgonzola, and a mousetrap given to him by his son.

And what happens when he gets there? It’s all rather charming and you’ll need to see the movie, which means you’ll need to learn Italian. Or just go there, hog wild, like I did.