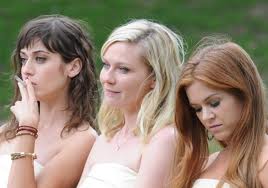 Bachelorette, based on Leslie Headland’s hit 2010 Off Broadway play, has been touted by some critics as a gritty, mean-girl version of Bridesmaids, with Kirsten Dunst playing Reagan, the “wedding party equivalent of Hannibal Lecter” compared to Christine Wig’s portrayal of an adorably clumsy yet devoted bride’s best friend. But a comparison is pointless; Bachelorette, about three friends who reunite for their high school friend’s wedding, is nothing like Bridesmaids. This is a movie about girls reaching the end of their hardcore partying days. Think post-high school and college; think Friday nights throughout your twenties, the days before wine, when your five dollar drink showed up in a tiny little glass.

Leslie Headland had difficultly getting studios to take on Bachelorette because her characters “weren’t likeable.” Reagan, the snobbish, ivy-league educated beauty; Gina, the dark, aimless drifter; and Katie, the annoyingly ditzy fashion clerk, all whom cuss, have sex, get drunk, and do drugs. What’s so unlikeable about that? Certainly it’s no cruder than Hangover (nor as good). 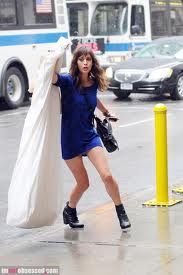 “What’s a bachelorette party without the bride?” Katie raises her beer and asks. “Friday night,” responds Gina, deadpan, before leaning in for a line of coke amid the shrill of her friends’ naughty laughter. Becky, the bride and only friend who’s managed to achieve a semblance of maturity, has opted out of the bachelorette party because she wants to get a good night’s rest before her wedding. What’s left to do but party on without her, until they get stupid with the wedding dress that is, and end up spending the rest of the night alternatively partying and trying to fix it.

Sure, they’re annoying, all vainglorious and self-absorbed. Who wasn’t back then? And I will admit to almost switching off the movie early on for this reason (it’s available pre-release on on-demand cable), but the girls grew on me, and if not for that one little hiccup with the dress, Reagan was an entirely devoted friend, going to all control-freak lengths to pull off Becky’s dream wedding. Aren’t all girls unlikeable? Perhaps we should talk in terms of degrees. In my mind the girls in the HBO series Girls are more unlikeable than Reagan and her friends in some ways. And I’m a fan of Girls, and its writer/director Lena Dunham who plays the main character Hannah. Post college and cut off from her parents’ money, entitled, highbrow Hannah stumbles around Manhattan trying to figure out how to live. There’s the whiney factor, bit she always manages to come off real—tattoos, cellulite, and all. There’s a rawness about her. When Hannah gets angry she looks ugly, as one tends to look when cussing someone out, rather than beautiful, as say Carrie might look if she were going off on Big. When Hannah has that often disturbing sex, she comes off vulnerable, embarrassed, and awkward, as opposed to Samantha on Sex and the City, whose sexual escapades feel more like those gorgeous Circ de Soleil acrobatics. The character Mavis (Charlize Theron) in Diablo Cody’s Young Adult…now she’s unlikeable. She’s someone you want to stay away from. Which makes me wonder why I was so ironically drawn to the movie.

Bachelorette is not necessarily something to rush out and see, but the director did a good job of tugging at my chords of nostalgia for the lost days of wild abandon. While home on vacation with my sisters recently, we invited a few long-time girlfriends over to celebrate someone’s rather unfortunate birthday. After wine and cheese on the terrace, we peddled beach cruisers down the strand to an emptied-out waterside restaurant. More wine, some bad shrimp cocktail, we talked about where respective kids were going off to college and basked in the warmth of good friendship. Then we rode back to our beach house rental, where there was an attempt at a quarter’s game, some pretense at gulping from a red cup, then bed, followed by snoring. In the old days someone would have accidently ridden her bike into the ocean, or off the pier. Someone would have gotten lost. There might have been a search and rescue. Days long gone, and good riddance to the whole mess, of course.

“Are we going to be alright?” Katie asks at the end of the film as the three girls sit slouched on a bench, hung over. No one has an answer. I didn’t back then either.