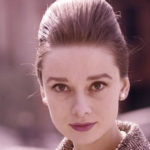 Sure, I’m a fan. The romantic in me; who doesn’t want to be a princess wandering the streets of Rome with Gregory Peck? My thirteen-year old niece, that’s who. I made her watch “Roman Holiday” with me once, a mistake; she was bored, confused by the outfits and hairstyles, not to mention the black and white, and not shy to tell me so. I was hurt, in disbelief that she couldn’t fall in love with the movie as I had. I still have hopes that she’ll come around… My nephew has. He’s twelve and we’ve already watched “The Way We Were” together (his idea), and “The Conversation,” a 1974, raw, gritty black and white with a young Gene Hackman.

“Audrey a Roma” was on exhibit at the Museo Dell’ara Pacis in Rome, steps away from where I was staying with my husband’s Roman cousin and his family (one of their kids is my godson). When I mentioned the exhibit they seemed curious but ultimately indifferent, as I imagined most Romans were, that it was the media who’d glorified Audrey’s life in their city for us sappy, live-happily-ever-after-in-Italy Americans. Anyway, I went one night (alone), me and a dozen other tourists. It’s a tiny exhibit, random in its setting––underneath the most ancient of tombs––Augustus––inside the most modern of museums––a slick and glossy rectangle that sticks out like a sore thumb in the middle of the Ancient Center. The architect, Richard Meier, is an American, and I know from my cousin that Romans remain divisive, if not just confused, about the structure.

Audrey made three movies in Rome, Roman Holiday, War and Peace, and the Nuns Story. Romans “fell in love with her” for her elegance, style, and felicity. The exhibit displays 150 never publicized photos of her, candidly, throughout the streets of Rome, at first on the sets of her movies, then later, in her every day life. The photos are coupled with displays of her iconic outfits, dresses and shoes so tastefully styled that I’d wear them today, if I could fit into them that is. What I didn’t know was that, divorced at forty, Audrey married an Italian and moved to Rome. She quit movies to raise her two sons there, where she lived the last twenty years of her life. It was interesting to see the photos progress from her first years as a visitor––the gleam, the playfulness––to her later years as a resident––the subtle decline in her spirit seen ever so faintly around the eyes, a tiredness of all the glitz and glamor, of always have to be on show, of dressing with such subtle perfection, what I imagine was not, in fact, so subtle on her part. The playful laughter was gone toward the end, the light in her smile, something the exhibit doesn’t advertise, of course, though I saw it so obviously, for I, too, married an Italian, and it’s never as idyllic as it wants to be, even when it is. There was one picture in particular that hit home, Audrey with her husband on some narrow cobbled street headed inside her mother-in-law’s house for Sunday supper. I recognized the look, and thought, she’s no different than anyone else. I can’t imagine, especially with all those eyes on her, that she ever felt like a local, that Italy could ever really feel like home.

I left the museum and stood for a moment on its marbled platform. Night had fallen, Rome in all its glory, and I breathed it in. Then I turned down Via Ripetta towards Piazza Popolo, who’s cafes were calling.