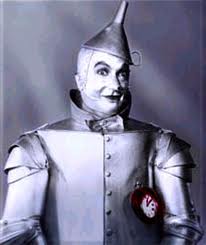 My father played the Cowardly Lion in a performance of The Wizard of Oz once, though I’ll always think of him as the Tin Man, teetering around, poised to fall over. And while my older siblings were off flailing in all directions, I was the sap running around behind him with the oilcan at the ready. Every so often I’d squirt him for no reason, and he’d say something like, “Now what did you do that for?” with that look of harrumph on his face. What’s funny is that he never actually did fall over. It might have seemed like he was about to, but at the last second he would right himself, and then turn back at me with a mischievous grin and say, “Gotcha.” He wanted to make sure I was watching, this, his chance to have the last word, for I had a wickedly sharp tongue as a teen, and I rarely ever let him.

My dad was a night owl; I’d often hear him creeping around the house at two am, perhaps limping up the hall and putting an ear to our bedroom door, as if he still couldn’t believe that we were actually in there, his kids. He seemed unable to fathom that he’d done it, managed to achieve the one thing he’d always wanted. A family. It was kind of like the Tin Man searching for that heart that he already had beating inside him, the biggest heart of all.

I hated the idea of my dad wandering around the house alone at night, something he knew about me, and so he’d pretend to go to bed when I did. “Goodnight sweet prince…” or something like that would be uttered, and we’d each head off to our rooms. His was upstairs, and, unsure that he was indeed going there, I usually paused in the hallway to listen for the sounds of his ascent, the banister creaking under his weight, air blowing out his lips as if he were playing Guilietta’s trumpet. At last at the top he’d disappear, or seem to, except for those times when he would get down on his knees and peak his head around the wall. “Gotcha,” he’d say, catching me standing there. “Dad,” I’d gasp, in that admonishing tone, startled and embarrassed for loving him so much, and I’d run off to bed.

At some point we both realized that this was an act. I was the audience and he was the star and this was our own little performance. Only now the curtain has come down its last time, I’m standing up from my seat trying to clap with one hand, and my dad’s peaking out through the folds saying, “Gotcha.”