Amour (Love) at its most illuminating 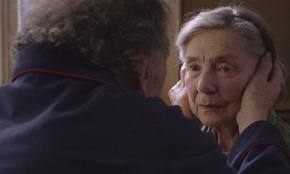 The French-language film, Amour, is about an elderly bourgeois couple confronted with the end of life. It won the Palme d’Or at Cannes, and the director Michael Haneke was also responsible for the Oscar nominated White Ribbon and Cache’. I assumed the he in my life, the he who had loved those two movies, would naturally go with me to see Amour. He declined, and was even-toned in his response. “I would rather not see a film about two old people dying.”

“I suppose I see your point.”

So while I went to the Film Forum to see Amour, he went to Union Square to see, of all things, Killing Me Softly with Brad Pitt. I tried not to contemplate the irony. This movie was about dying, too, presumably.

Life’s simple, slow moving pace opens Amour, as we watch Anne and Georges enjoy a concert, the camera panning on the audience from the stage, where her ex-student is performing the lead solo. Afterwards, we observe them ride home on the bus engaged in idle, intimate chatter; we enter their tasteful Parisian flat and move around its tired and worn rooms in observance of their nondescript lives, in their eighties, retired music teachers, their meanings reduced to its very core: a symphony-like relation with their lifelong other. Their faculties are fully intact, until one day Anne has a stroke and everything goes dark. Georges becomes her caregiver. No hospice, no hospitals. We never leave their home again.

Two hours stretch on for what feels like months, or the blink of an eye, as we shuffle around their rooms, suffer through their frustrations, eat Georges’ thoughtfully prepared meals, share their tenderhearted, sometimes despairing looks, their anger, their scorn, because of course Anne sees no point in prolonging her life, and Georges knows that that is exactly what they must do.

Not one proclamation of love, not one kiss, certainly no lovemaking. Yet by the end of the movie you know that’s exactly what you are seeing, the kindest, deepest love. 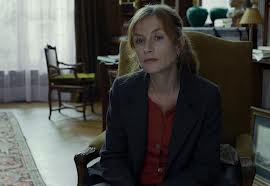 “Your concern is meaningless to me,” Georges’ tells his overwrought daughter (played by Isabelle Huppert) who has made a surprise visit from London because her father won’t answer the phone. “You can’t go on living like this.” Her words are empty.

Amour is not for everyone, but it’s worth the effort to witness the finest of French actors—Jean-Louis Trintignant and Emmanuelle Riva—perform what must be one of their most beautiful (if not last) performances, and in so doing to watch life—and love—at its most illuminating, here in the shadow of death.

“Life is beautiful,” Anne says at one point while looking through a family photo album, her fate before her. “And long. So long.”