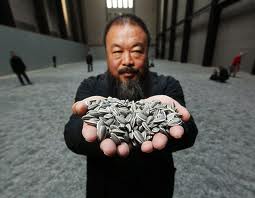 A strangely warm day in January, crisp, bright, we took off on a walk with light jackets and no destination in mind. Five Avenues later, having wandered into a random Chelsea art gallery, we found ourselves staring at a massive, wall-to-wall rectangular landscape of…we weren’t sure at first… We moved in closer. Sunflower seeds? Yes, sunflower seeds. But were they real? I bent closer. No, not real. Porcelain. Millions of them, but that’s nothing. At the Tate Modern in London the exhibit included 100 million seeds, each one hand-painted by the 1,600 artisans that Ai Weiwei employed in Jingdezhen, the town who crafted porcelain for the Imperialist Empire.

I stepped back, having one of my Is this art? moments. And if you read my post, Marina Abramovic The Artist is Present, you know how I feel about the Is this art question. Move on. And so we did. We left the exhibit trying not to think too hard about the stunning visual impact all those little handcrafted seeds imparted on us.

Fast-forward eight months. Ai Weiwei: Never Sorry, wins a special jury prize at Sundance. My thought when I read the news? That’s the seed guy! No. Actually. He’s much more than a seed guy, which is why it was important for me to see this film by first time director Alison Klayman. Weiwei is one of the most powerful artists and political dissidents of our time. An eloquent, soft-spoken man, Klayman captures every nuance of his affable, reflective vulnerability in this powerful and absorbing documentary. 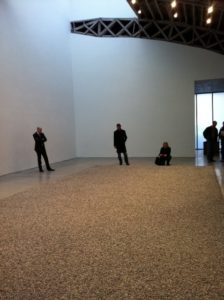 When I had stood musing over those seeds, the Chinese government had just released Weiwei from an eighty-one day detention for reasons that remain obscure. His exhibit “Circle Heads/Zodiac Signs” was being installed in Central Park while Weiwei remained “missing.” Not unexpected. Weiwei pushes the edge. He is not ashamed, for instance, to use his middle finger, what pops up in a variety of his art mediums, both verbal and visual, to let his motherland know what he thinks of her. As such, he has become a global brand, the symbol of liberty, individualism, and above all, transparency. After the 2008 Sichuan earthquake, Weiwei went from town to town, tallying student deaths because the government wouldn’t release the information. (It is now estimated that over 7,000 inadequately engineered schoolrooms collapsed in the earthquake). Those students’ names, all five-thousand-one-hundred-and-ninety of them logged by Weiwei, have since been immortalized via his art.

“Art is a tool to set up new questions. To create a basic structure open to possibilities. I want people who don’t understand art to understand what I’m doing.” To not be alienated, I interpreted, thinking back to the seeds, each one unique, different. I may look like everyone else, but I too have a voice, and it’s my own.

What’s ironic is that the more the Chinese government denies Weiwei his voice, the louder and stronger it becomes. They have disabled his Facebook account, stripped away his blog, demolished his Shanghai studio; he is constantly watched, followed, harassed, and sometimes beaten. His answer? Twitter! Poignant, goading messages hit the airwaves at an alarming pace. (I went online to read some myself but the Tweets were in Chinese, go figure.) Since his detention, Weiwei has been banned from speaking to the press but continues to do so. But then he has had ample experience with perseverance in the face of brutal adversity. Communist China sent his father, a romantic poet, to the North for two decades to be “re-educated,” i.e. beatings and public humiliations, all of which little Weiwei got to witness first hand.

“I’m not fearless,” he assures us. “I’m very afraid, and that’s what drives me to act.”