Argo is a riveting, smart, exacting film. Based on a true story related to the 1979 Iranian Hostage Crisis, six Americans managed to slip out of the embassy just before the Islamist revolutionaries stormed the building. The Canadian ambassador gave them refuge in his home when others wouldn’t. The story follows the CIA’s plot to sneak them out of Iran months later. The film is gritty yet often funny. The seventies prevail throughout, from the old Warner logo used in the opening credits to the period music drumming in the background. Ben Affleck transports the audience to a particular moment in America’s history of terror and chaos, and he takes pains to get it right. The man deserves whatever recognition he gets for his deft and subtle direction. 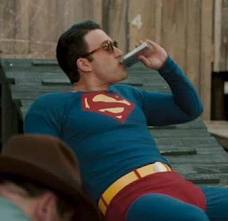 It’s Affleck’s acting that troubled me. Sure his character, “master of disguise” CIA agent Tony Mendez, needs to play it cool, but quasi-comatose? Hollywoodland comes to mind, another powerful film in which Affleck plays the lead character with deadpan charm. Only in this case the absent and emotionless portrayal works because the character Affleck was portraying, George Reeves, the actor who played Superman in the TV series, slowly gives way to a depression so deep that his only course will be to shoot himself.

Mendez specialty was “getting people out.” To do so he created facades, cover-ups, and costumes; he make-believed. He acted. Though the sting he created for the Iran operation was particularly stranger than fiction. With help from Hollywood, Mendez created a fake movie that would allow him to disguise the six Americans as a Canadian film crew scouting out locations. Mendez himself played the associate movie producer. But in the film, Ben Affleck, who plays Mendez, doesn’t affect to be anything like an associate movie producer. Don’t producers have just a little bit of flamboyance? The only time Affleck reveals any emotion is when he argues with his boss over the phone at a harrowing, everything-is-at-stake moment. Yet Affleck strains to barely raise the pitch and pace of his voice. Perhaps it’s intentional. He doesn’t want to overpower the seriousness of the story with himself, but come on. How about breaking into a little sweat?

There’s nothing wrong with subtle, but sometimes too subtle gets in your face. 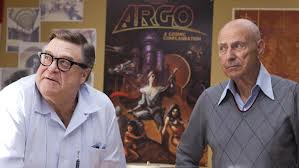 Acting aside, the film’s pace is alternatively gripping and humorous. When I’m not tense, I’m guffawing. Hollywood makes fun of itself in the form of lines delivered to deadpan perfection by the hilarious sidekick duo of Alan Arkin and John Goodman.

The movie’s pace is perfect until the last forty minutes. Ben’s got us squirming on the edge of our seats but apparently that’s not enough. Every last little step on our way towards “mission accomplished” must at first seem to go wrong. Will the phone be answered? Will the car start? Will the plane reservations be rejected? Will Arkin and Goodman ever be able to cross the street? Tick tock. For no second are we free from being on the brink of peril. It began to border on the absurd, a tinge of Hollywood excess creeping in (in reality the group boarded the plane, with no issues). Certainly the Spielberg ending didn’t help.

The film, while excellent, left me a little disappointed, not in the movie, but in its director. Act man, act. If he’s not going to put himself out there and act, then hire someone else for the role. His brother, for instance. In writing we are taught to take ourselves out of the story. Is it really that difficult for Affleck to look beyond himself for the Mendez role? As an artist, is he really no different than the rest of us?