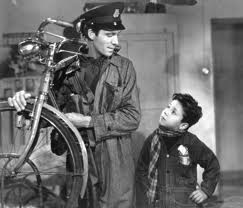 I was still thinking about that kid with his bike in the film Le Gamin au Velo’…when, lo and behold, what movie was playing on TV last night but Ladri di Biciclette (The Bicycle Thief, erroneously translated for American distribution, btw). The Italian film by De Sica, a neorealist classic, one of the visually bleakest films you’ll ever see, but also one of the most beautiful and heart wrenching.

In the depths of Italian post-war reconstruction, a father lands what might be the last job to be had in the entire city, all because he has a bike. Well, sort of, he’d hawked the bike a while ago, but with the help of his wife who sells their prized possessions, linens, they get the bike back. The boy, brimming with his father’s excitement, lubes and spiffs up the bike, and stands proudly watching his father ride off for his first day of work. It’s a scene that’s got bad news written all over it, for the father’s barely completed his first act of labor, when someone steals the bike right out from under him. The event sets off an anxious, father and son search for this bike throughout the streets of Rome (looking its post-war grittiest), because, like the kid in Le Gamin au Velo’, without that bike they are nothing. 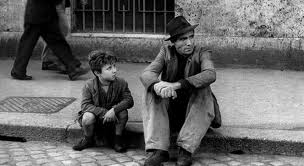 But as desperate as the man is for that bike, he never loses sight of his son marching along beside him, even when it seems like he has. In his grief, he still manages to scold the kid for not wearing his coat, or tuck an errant scarf around his neck; and at one point, half-deranged, spends his last lira to break bread and share wine with the boy who can’t be more than six-years old, man-to-man.

Even when all hope is lost, and it is truly lost after the father performs one last act of desperation to find his bike, any bike, an act he barely manages to escape the consequences of, what we are left with, the hope this movie offers us is that, after all the searching and suffering, the man and his son have not lost each other. It’s something they don’t know yet, presumably, as the movie ends with tears streaming down their empty, broken faces, but we do. We know.