A strange and beautiful place 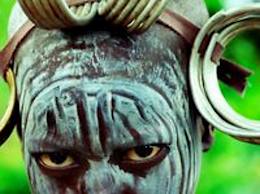 Samsara is a Sanskrit word meaning “the ever turning wheel of life.” It’s also the title of a new film by Ron Fricke and Mark Magidson, who spent five years visiting one hundred locations in twenty-five countries with a 70mm camera capturing the most breathtaking images you might ever see, unless you manage to get to these places that is, and then sit hovering over them for days at a time. Some places you’ll recognize, most you’ll be left wondering, because the film doesn’t explain; it doesn’t tell you where or why. No words, just profound music and powerful images—random in time, weightless; we pass over sand swept plains, exploding volcanoes, ancient ruins, mountain temples, throbbing cities, devastation wrought by industry and nature. We examine the blank faces of tribesmen, office workers, and believers. We are all connected, the stunning images want to say, we are part of everything and everything is part of us.

For a while I was pulled into this peaceful, trance-like place (enough to drift off to sleep momentarily), but I was never able to stay there, to let go completely, to spin around in this circle of life and forget all else, like I’m supposed to do in yoga but can never manage to, that elusive quest to be enlightened, to live in the present. I thought this was what the directors had intended, for us to experience, not interpret. Instead, the film woke me up. Many of the images were disturbing, in some cases shocking, like a performance art piece involving an office worker and a jar of mud; cows on a circular belt being fed and milked like machines by machines; suckling pigs feeding from their caged, lifeless mothers. Images I’m hoping my mind will soon erase. 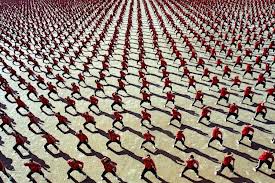 Other images pose the question: Should one go through life not having seen this? From the inside a maximum-security prison in China, a mass group of inmates dressed in orange prison garb dance hip-hop in robotic, almost hypnotized synchronization. Rehabilitation? Pigs, cows, and chickens are farmed, processed, and packaged in disturbingly massive quantities, in assembly lines that could fill football stadiums. We see the production of ammunition, plastic sex dolls from uncomfortable angles; a worker adheres glue to a device over and over again until you feel nauseous, as you imagine he feels at the end of a day. The camera’s fast forward motion gives these scenes a chilling air. But then there’s St. Peters, and the most extraordinary view of prayer at the ancient Kaaba in Mecca.

Imagine the days before moving images? 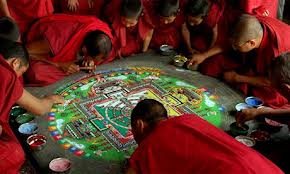 I preferred not knowing where I was, and I was glad when the director circled me back to where the film began, with monks in a mystical location I couldn’t place, bent over a large table engrossed in painting a picture of the world made of colorful sand. Finished now, they gave it one last contemplative look and then casually brushed the sand away, scooped it up into small bowls as if all there was left to do now was to clean the slate and start again. In Zen philosophy life is present. It’s the act of making the painting, not loving it after. I could not help seeing the ashes of my father in that bowl of sand, whose colors, now blended, became a glinting grey. I had just returned from a family trip to spread the ashes of my father, what are now, as we speak, settling further and further into the earth. The image of those monks sweeping away the sands of the world they had created in order to make room for a new one left me with a strange, and slightly peaceful feeling about my father’s death. It’s his time, and ours, to paint the world again.