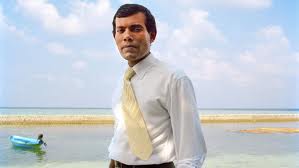 There are movies out about the end of the world, but for the Maldives this may be a reality. As the lowest lying country on our planet, if seawaters rise enough the Maldives could possibly be the first country to cease to exist, in our lifetime. Entire cultures have been wiped out by war, pandemics, and natural disasters, but their lands have remained to tell their stories, their cities and identities have rebuilt themselves, if even into different forms. But for the Maldives there will be no rebuilding. A cluster of nearly 1,200 islands in the Indian Ocean, with picture book beaches and pristine aqua marine waters, you’ve seen the pictures, it’s the place the rich and famous go. Not. Entirely. In fact, the islands have been populated for 3000 years, with a strong culture and a national identity, their own language, and a capital that looks like a miniature Manhattan (though sitting in the middle of gorgeous waters, the picture is rather incongruous to look at).

Joe Shenk’s riveting documentary, The Island President, charts the quest of Mohamad Nasheed, who assumes the Presidency after a surprise win against the country’s thirty-year dictator. And while we think we’re headed off down a road of civil strife the film quickly changes course. For Nahseed and his constituents there is an issue more critical than promoting democracy—his country’s physical survival. Climate change, one of the most polarized debates of our time—Nasheed, who’s country is sinking, has no choice but to take it on. Handsome, eloquent, intelligent, Nahseed proves himself a determined, relentless and genuine leader (At one point he holds a conference with his cabinet underwater to demonstrate his case). 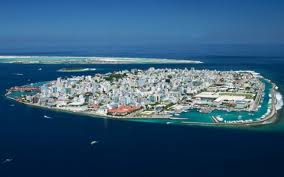 The film starts with the 2009 Global Climate Summit in Copenhagen just months away, and as we watch Nasheed maneuver and strategize his “inconsequential” country’s position amongst the world leaders who will attend, I became unable to take my eyes off him. “What happens if you can’t get the 350 emission limit into the Summit document? What are the contingencies for the Maldives?” a reporter asks him at one point. “There are on contingencies,” he responds, a rare frustration creeping into his demeanor. “We will all die.” Drastic, yes, but whatever he’s doing works. He’s got the press and the demonstrators on his side now. And while he doesn’t get the 350 it’s partly due to him that a climate management agreement, the first ever, comes out of the summit at all (with no hard metrics to achieve, the agreement just asks countries for a commitment to “try,” and emissions have since gone up not down, care of India and particularly China, who of course don’t want controls).

Who cares about a bunch of islands in the Maldives? Me. And not because I’ve always dreamed about taking a vacation there, but because this is not their fault.  Because the catastrophic consequences are hard to imagine, and unlike Melancholia, Take Shelter, and Tree of Life, this is not a film. The Island President makes climate change real; Nasheed makes it personal.

None of it matters Nasheed tells us in the end of the film, back in his home country now, where funds for education and healthcare must continually be diverted to building sea walls and pouring landfill. At one point, a local mother wonders about her children, if in hindsight she should have brought them into the world at all. Where will they go? Even the graveyards of their ancestors will be gone.