A Sex Scene to See With Your Lover…Not Your Father 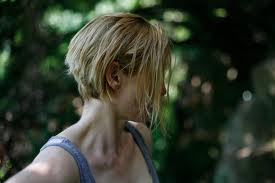 “I am Love.” An Italian film from 2010. Tilda Swinton plays Emma, the repressed wife of a wealthy Milanese businessman set to inherit, along with their son, the family business and masses of wealth. This is a movie about the extremely privileged, a social class my father takes offense at, but forget that, I had read the review in the New Yorker and dragged him to it anyway. I was home for a brief visit; we were desperate, for we’d each already seen everything else out in theaters. Just before leaving the house, I warned my father about an apparent sex scene with a prawn we were about to witness, and that if he wasn’t OK with that then we didn’t have to go. Of course he quickly shrugged me off, ever the competitor, saying, if I could handle it so could he.

Start with the musical score, pulsing, dramatic, I was immediately entranced, if not enraptured by the film, as was my father, I could tell. The movie is sensually driven, stunning to look at, drifting through the purple fog of Milan in winter, those beautiful Italian creatures in their finely cut clothes, the sumptuous food, and sleek, modern lines of the mansion they live in.

“The best sex you will get all year,” said the New Yorker, about Emma and that prawn—totally overrated… Emma is eating seafood at a fine restaurant and with each slow, suckling bite surreal ruminations swim around in her head. But the scene was over pretty quickly I remember, to my immense relief …until, and this I wasn’t prepared for, a much more vivid and intensely drawn out sex scene that came much later in the film, one the New Yorker had not mentioned (how could they not have mentioned it?)—Emma, awakened, becoming one with her young lover, nature, and earth all at once. If you could define the difference between sex and making love, this scene might be it (for the women anyway). No score, just the buzzing of bees and birds and wild flowers swaying in a breeze, sunlight dappling through the trees onto the full light of their naked flesh.

I’m getting carried away here now, but back then, next to my father, my only thoughts were, “When the hell is this going to be over.” Five, ten, maybe fifteen minutes went by, whatever it was felt like hours, and I kicked myself for my arrogance, for being perhaps a little like the film—pretentious? For this wasn’t a film as much as watching the slow explosion of color in a painting at the MOMA, one you have stood before for some time trying to interpret. “The Tree of Life” comes to mind, “Melancholia,” “Take Shelter,” all so vividly sensual and cinematographically gorgeous; you feel like you have stepped into a piece of art. I know most people don’t go to movies for this reason, but, if nothing else, you should see “I am Love” for this one scene, and make sure to have a handsome, possibly foreign, fully imagined lover next to you, and not your father, however open minded he is.