A film lovers guide to dealing with the hurricane… 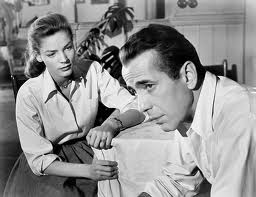 John Huston’s film noir, Key Largo, stars Humphrey Bogart as Frank McCloud, a disillusioned war veteran who stops off at the Hotel Largo to pay respects to the wife (Lauren Bacall) and father (Lionel Barrymore) of a deceased war buddy. Edward G. Robinson plays the murdering, washed up gangster Johnny Rocco. He, his ex-lounge singer lush girlfriend, and his gang are hiding out at the hotel waiting for a money drop before fleeing to Cuba. It’s summer, the off-season, hot and sweaty as hell, and a hurricane is approaching. The sultry Bacall can smell it in the air and feel it in her bones. A clapboard window slams open. “It’s gonna be a big one.”

It was either Key Largo or Wolf Blitzer in the Situation Room, and after three days of anticipating Hurricane Sandy we couldn’t take any more impending “Frankenstorm” news. We’d done our preparations. Taken our precautions. Like the owners of Hotel Largo, it was time to wait it out as these people so routinely do. These people who live in the paths of hurricanes that is, island dwellers in the Caribbean and The Keys for example…and now Manhattan.

Sandy was scheduled to land around 8pm in the vicinity of Atlantic City. We began watching Key Largo at seven, rented from iTunes and streamed via AppleTV. Ten years ago, when consumer streaming barely existed, this brilliant, last minute idea to watch a hurricane movie during a hurricane could not have been executed. On August 14th, 2003 to be exact, when the entire island of Manhattan was infamously blacked-out due to an electricity grid malfunction. Back then a cell phone was just that, a cell phone, not a hand held device that functions as a personal office. Some texting, no emails, no Cloud; no iTunes or Netflix, no Apple TV, Kindles, iPads or WiFi, certainly no MiFi. 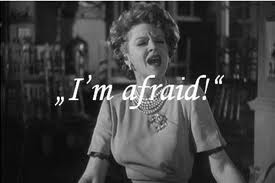 My husband was in the middle of cooking dinner for twenty of his work colleagues at the time the 2003 blackout occurred. Two days with no cable, no Internet, we took to the streets with our flashlights along with all the other Manhattanites wandering around in the odd and eerie blackened silence. Our cell phones were of no use. We read and talked and drank wine.

In anticipation of Sandy, along with stocking up on water, candles and batteries, just as important was making sure all our electronics were fully charged. An entire checklist was devoted to this. This way, if the power did go out…

… as the bar glasses topple and the chandelier sways, as the roof strains and the wind howls and tough guy Rocco nervously paces, as Barrymore narrates tales of the Big One of ‘35, where 500 people were washed out to sea, where 200 mile an hour winds and twelve foot waves wiped out entire towns, when corpses were found in the mangrove swamps… Just as he prays for the storm to send its wrath raging down upon them, the tree crashes through the window and…. complete darkness; as does the power in lower Manhattan and in our loft.  But no worries; we get out the iPad and thanks to the Cloud we finish watching the movie.

When the film was over, we connected to the MiFi and searched for news. The connection was slow and intermittent, but it worked.

Four to ten days is the current projection for restoring electricity to our area. This morning, battery depletion being our primary concern, as opposed to water or food, we loaded all our electronics and their respective chargers into a briefcase and began the trek uptown to find electricity. We weren’t the only ones. There was an exodus of iPhones pointing to the sky searching for one or two bars. On every other corner, crowds of people stood with their phones and laptops plastered against the windows of shuttered Starbucks or other establishments downloading their emails, addicts desperate for a fix.

I’m writing and posting this blog from an office building in mid-town with an Ethernet connection. Wires are emanating from every USB port and my MacAir looks like it’s on life support. But two movies have been downloaded. Battery capacities are back at 100%. We’re ready to go home to the dark.