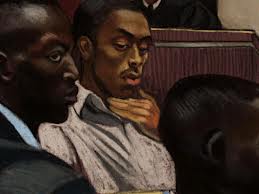 I moved to New York City in 1999, after having spent my life living across the country in various suburbs and pseudo cities. I received some very cautionary, wary goodbyes. Be safe, don’t ride the subway at night, and don’t make eye contact. To the contrary, I’ve never felt so safe, still, more than a decade later. Not one wandering night have I felt the need to look behind me on the street to see what was there lurking in some shadow, as I often do walking a vacant suburb street at the same hour, even when I’m walking a dog. I ride the spotless subway at all hours, I hop into cabs with no thought, a one a.m. jaunt to the brightly lit pharmacy couldn’t feel more unthreatening.

I came to Manhattan post gentrification. Manhattan was not like what I described above two-and-a-half-decades ago, say in 1989 for instance, when on one particular night a group of black and Latino kids roamed Central Park throwing rocks, harassing bikers, and beating up a homeless man. This happened to be the same night that another, much more horrific event occurred, an investment banker from the upper east side, out on her evening jog in the Park, was found beaten and raped and left for dead. The attack on this white woman, the Central Park Jogger, rocked New York, what was back then a city fueled in crime and drugs and racial tension; six murders on average occurred each night. “Wilding,” was the term the press used to brand these kids who ran like a “wolf pack,” a subset of them already pronounced guilty of the rape before they were even taken in for questioning. Months later, five of them would be convicted. 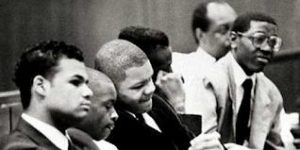 In the painfully affecting documentary, The Central Park Five, written and directed by Ken Burns with his daughter, Sarah Burns, and David McMahon, the five kids—now men—eloquently narrate how they were coerced, victimized, and manipulated into giving fabricated confessions of the rape. The director intersperses these interviews with actual video footage of those confessions, what would ultimately bring the boys to their doom, even though there was conflicting DNA evidence (semen) found on the woman belonging to a known serial killer, DNA that would only be released thirteen years later, when the five were exonerated, and not just because of the DNA evidence but because the known serial killer had come forward and confessed to committing the crime. By then the five had served their terms, ranging from six to thirteen years.

I had no recollection of their exoneration, for there was only a whisper of it in the press, compared to the boys’ hyperbolic and celebratory convictions, their names splashed all over the front pages of every paper.

At the end of the documentary, the five, who’s souls are by now under your skin, try to articulate how they live with this irreversible, inexplicable gap in their lives, a gap for which to this day the city refuses to apologize for.

What you see in this documentary will astound you. It is brutally depressing to watch, but these men deserve at least that much, for their lawsuits against the city after ten years remain unresolved. I left the theater, struggling, the film lurking behind me as I walked home, in every corner a dark shadow—a city, its people, and what they had done to these boys.