Me, My Niece, and A Cat in Paris 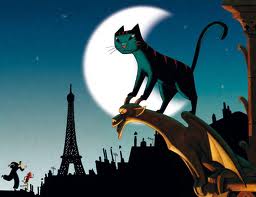 My nine-year old niece visited me in New York this weekend. Of course there was a Broadway show, Central Park, FAO Schwartz, and Coney Island, but a movie? Why would you take her to see a movie? Because they’re not showing “A Cat in Paris” in Washington D.C., where she lives, and I was dying of curiosity. I’d seen the previews at the Angelika Theater, a French animation film about a black feline, Dino, who by day is the loving companion of a young and lonely girl, Zoe, and by night the assistant to a kind-hearted, soft spoken cat burglar, Nino. Together Dino and Nino slip deftly across the rooftops of a starry skied, mysterious Paris, one the film’s creators, Jean-Loup Felicioli and Alain Gagnol, depict with more enchantment and love than even Woody Allen managed to do in “A Midnight in Paris.” Each morning after his capers, Dino brings Zoe a dead lizard as an offering, ones she collects and cherishes. 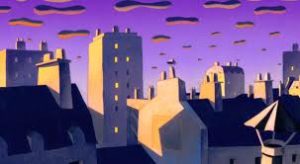 At first brush it felt as if I was with my niece in her bed listening to her read from her favorite storybook, only its characters were alive. The film is intended for kids, certainly, but would a kid like the sublimely simple visuals, or the midnight blue moodiness, the sensitive characters, the honest themes and artistic feel? Would there even be any kids in the theater? Answer: no. My niece was the only kid among a very sparse attendance of adults. Would she like it? Answer: yes. I’ve been to many animation films with kids over the years, and never has one leaned over to me at three different times and whispered, “This is a really good movie.” Or the other time she giggled into her hand, “Those are really weird clouds.” Never has there been a quiet moment in those loud, chaotic extravaganzas where I would have been able to hear the pure, innocent excitement in her voice. Like we were sharing a secret. And no doubt we were, perhaps will always. Maybe when the film is released on DVD or Netflix, children will flock to it. I hope so, but secretly doubt it. 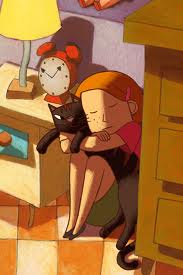 To the tune of a suspenseful, Hitchcockian score (plus one wonderful Billy Holliday treasure) the film’s intricate plot unfolds at a gripping pace while still managing to exude nothing but grace, elegance, and allure (and in a very humble, unHollywood one hour’s time). Zoe’s father, a detective, has been recently murdered, and her mother, Jeanne, also a detective, is overworked trying to find the man who killed him, the evil and sinister Victor Costa. The directors do not compromise on their villain’s black soul for the sake of their younger audience. Nor do they dumb the themes down for them either. Take Jeanne, a mother struggling with her guilt as she attempts to do right by her daughter, which means leaving her most of the time in the care of a mysteriously devoted nanny voiced by Angelica Houston. And making some bad choices; what kid or adult doesn’t know about that. Zoe hasn’t spoken since her father’s death; her ideas are conveyed to us in expressions, in daring, courageous leaps of faith after one night she instinctively follows Dino and gets herself into a harrowing string of troubles.

The movie is tender, scary, mysterious, adventurous, sad. Not unlike a kid’s life. Count the ones lucky who have feline companions, for just to watch Dino slink up and around into Zoe’s arms as she sits with her head on her knees crying on the floor, and then settle himself there into a soft purr, will melt your heart. Or at least the hearts of those of us who felt, at one point in their lives, that their cat was their only friend.