A Big Night All Around 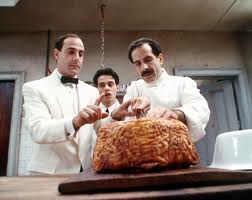 A close friend cooked dinner for me the other night. He’s first-generation Italian, and fiercely passionate about the culinary traditions of his homeland. I often get to reap the benefits…and endure the castigations…for instance, when I mentioned Stanley Tucci’s new cookbook, he calmly stopped what he was doing, and I knew what was coming next: a scene from his own Big Night. Suddenly he was a waiter in an Italian restaurant, in New York or New Jersey. He’s going off on a customer.

“I’ll have the shrimp scampi,” the customer says.

“I heard you the first time,” the waiter replies.

“You ordered the shrimp, I heard you the first time. There’s no need to say ‘shrimp scampi’, it’s like saying ‘shrimp shrimp’ or more accurately ‘shrimp langoustine’. You wouldn’t order a steak by asking for a ‘steak vacca or a ‘salmon salmone’? No need to repeat yourself. Just ask for the shrimp.”

“But that’s what it says on the menu…”

“Look,” interrupting. “I am just trying to be helpful and begin to correct the century-old mistakes that my forefathers embedded in American culture. The menu should say ‘sautéed shrimp with garlic, butter and wine sauce’. That’s what the dish contains. I’d half forgive them if they had said ‘shrimp scampi-style’, but that still does not make sense. No, it’s wrong, it’s been wrong for centuries, it’s time to right that wrong.”

“I’ll have the shrimp in garlic, butter and wine sauce.”

“Brilliant. Anything to drink?”

“I’ll have a glass of the California Syrah.”

The waiter makes a comment about the mismatched wine pairing. He is subsequently fired.

Thank God I’ve never had to make a living as a waiter in an Italian restaurant. 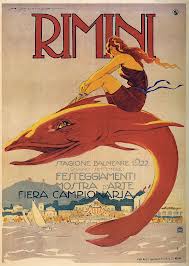 As a boy growing up in Rimini, a resort town on the less glamorous Italian coastline, I would sit and observe my grandfather (or grandmother, never more than one in the kitchen) create mouth watering meals from the simplest of ingredients—triglie fritte, risotti, paste asciutte of all kinds, every meal a veritable feast. And on every single occasion, no compromise was made with the ingredients, the preparation, the timing or how the meal was served.

Big Night always brings me back to those days. It’s a sumptuous, heart wrenching depiction of two emigrant Calabresi brothers who battle with American culture and themselves to save their Jersey Shore Italian restaurant from the brink of bankruptcy in the decades after World War II.

Like the younger brother chef, Secondo, perfectionist to a fault, I would not have been able to hold my tongue, even to appease the pleas of my desperate, older, and much wiser businessman brother Primo. I see myself in Secondo as he refuses to satisfy a patron’s request for risotto and a side of spaghetti and meatballs. No compromises.

This week The Tucci Cookbook will be released. I’m sure he’s applied the same standards as he did with “Big Night.” I’m sure he had Secondo review the recipes…I’m sure he’s been able to capture the essence of what food means to an Italian (and Italian-Americans). What a meal means. I even hear the recipe for the famous Timpano is in it…

What about one for a simple fried egg?

“Big Night’s” final scene is a masterwork of filmmaking. No dialogue, the morning after the feast, Primo and Secondo realize that their restaurant is doomed, and yet the simplest of actions becomes a metaphor for the film, the methodical process of something as simple as making breakfast. Frying eggs, the relentless immersion in the routine acts as a constant that allows the characters to stay pure to themselves, maintain excellence and fight another day. No compromises, no short cuts, no deviating from their core principles.

I asked him if he would share his grandfather’s shrimp recipe, Gamberi allo Champagne (above). He hesitated. Worn pages, stained yellow, the recipes hand written, he covets this book like a precious artifact. And yet, he relented. It’s in Italian. No translation necessary, according to him… If you’d like the English translation, send me a comment, and I’ll work on him.

And as for “shrimp scampi,” I’ve heard this tirade so many times that a version of it found its way into my upcoming novel, “Hurray for the Bride and Groom!”