A battle of kites, hearts, and skies 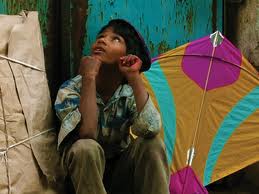 Imagine this. You walk into a theater, sit down with your popcorn, the room darkens, and the movie begins. No commercials, no cellphone warnings, no previews. That’s twenty minutes of my life I just got back, which is beside the point. The point is that I went to the theater to see Patang (The Kite). A lovely film that has the feel of a documentary, Patang is about a successful businessman from Delhi, Jayesh, who, with his adult daughter Priya, pays a surprise, overdue visit to his family in his hometown of Ahmedabad, India during the time of the annual kite festival. Like any family, Jayesh’s comes with demons, jealousies, and unresolved conflicts, not the smallest of which is that of Jayesh’s brother, who died some time ago from “drinking himself to death.” He has left behind a wife and a meandering, penniless adult son, who live with Jayesh’s mother in the crumbling mansion nestled on a backstreet in the city’s thick, dense old center. Sacred cows roam alongside goats, tuk tuks, scooters, peddlers, shop keepers, and barefoot children—the general throng of bodies and traffic of the oh so colorful India—through a maze of dirt roads and dun-colored, dilapidated structures.

Characters lives unfold subtly; emotions play out slowly—the nephew’s bitter anger at the sudden dissension of his mostly absent uncle turns unexpectedly tender as we watch him spend most of the film playing older brother to a group of street kids. Jayesh wants to care for his family, but his attempts fall flat, hence the festival, a competition he holds onto as firmly as he does the kite spool. 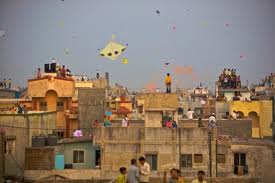 I had read about the Ahmedabad kite festival on a visit to India and had fancied going, as I wasn’t far from there. And while I have experienced first hand the realities of the country’s grime and glory, I’m embarrassed to say that I had a much prettier picture floating around in my mind of what this festival would be like than the version portrayed in this film. What I had in my head, I believe, was the Bollywood version. I give credit to the creator/director, Prashant Bhargava, this his first feature, for setting me straight and showing me a true, pure, uncut India.

Hundreds, maybe thousands of children spend the day scavenging across rooftops, or below, running through the maze of alleyways, gazing up at the kite gone astray, happy with hunger, anticipating the moment that sneaky little creature floats its way into their hands. Meanwhile, the capriciously tiered rooftops thrum with music, dancing bodies, feasts of laddoos, undhyu and surati jamun, and above all the skilled holders of the spools (firkees), whose strings are hand made with a special mixture of glue and glass to be as sharp as possible for cutting strings of rival kites. The battle for supremacy, both vicious and friendly, is against nearby kite-flyers, to cut their strings and bring down their kites, though for Jayesh it feels more like a battle to cut down the demons he harbors within himself.

The party pours on through a night lit with fireworks. The more skilled send aloft their tukkals with strings of brightly lit lanterns in a long line leading back down to the rooftop. At one point the local boy that Priya has fallen for stares up at them and tells her that one day he’s going to fly away too.

You could imagine how a director might glorify and beautify a story like this through “cinematography.” In fact most of the scenes are unscripted, raw. And the kites themselves, the thousands of them dipping and swirling through the sky, aren’t in fact the massive, technologically advanced, aerodynamically masterminded sails of my imagination (or what you might see on Google images). They are, at least in the “old city,” little squares or triangles, simply colored.

The next morning the skies become, literally, a kite graveyard, the telephone wires and antennas strangled in string and tattered kite paper, with a few sad, enduring souls dangling by their threads.