Jiro Dreams of Sushi…and so do I 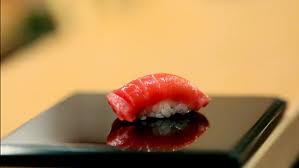 My husband and I had this great plan: we’d go see Jiro Dreams of Sushi at the IFC, then venture and indulge in a sushi dinner, somewhere other than our regular spot. Perhaps even splurge a bit.

Cut to ninety minutes later. We walk out of the theater in a daze, in the middle of a taxi-thronged 6th Ave. No. No sushi tonight. Perhaps never, until we go to Japan. The experience of this movie was to arouse every sense of my being, and take away any hopes of sushi eaten in the near future (or at least until next weekend).

The cinematography and camera work are remarkable. Each succulent piece of sushi gently placed on a black lacquer platter, one at a time, with such intimate closeness that you actually see the fish breath, settle, rest. One after the other, served quickly, no chatting or dawdling, little drinking, there’s a procession, a symphony, Jiro Ono, master of all masters, our conductor (the scene plays out to a fantastic operatic score). Jiro is eighty-five, and sushi has been his life for well over seventy years; every day, no exceptions (unless he is attending a funeral), he proceeds through a disciplined routine driven toward the achievement of one goal: perfection. His restaurant, awarded three Michelin Stars, seats ten and is located in the basement of an office building, in a subway station.

At one point Jiro tells the camera that his son must make sushi his entire life, for once one finds a craft, they must hone it, live it, love it, and continuously perfect it—shokunin. There is always room to improve, to explore, to create, even at eighty-five. This is the lesson he has driven into his sons whom he purposefully did not send to college, both sushi masters, the eldest, Yoshikazu working along side his father now, waiting for the inevitable day when his elder must retire, that day the son will take over the reins only to become known as the apprentice who can never replace the master. 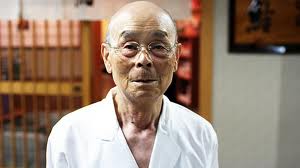 His fate; his duty, to his father, to his culture, an awful burden perhaps, one Yoshikazu won’t admit to though we see it bearing down on his face every morning as he rides his bike through the streets of Tokyo, a cooler strapped on its back, to the Tsukiji fish market. He’d once dreamt of becoming a racecar driver.

This is a beautiful film, and it’s not really about sushi. It’s about dreaming of a life where what you do is what you love. And in the relentless pursuit of your love’s perfection, you find purpose, fulfillment, and joy.

Now, sitting here, I don’t even remember what we ate that night. I can’t imagine it matters.